I don’t fear alot of things and as I get older, I fear less and less.

Back before Benjamin joined this crazy world, I wrote a post talking about what fears I had leading up to becoming a first time daddy. Find it HERE
Going back and reading that post I can still relate to it, but what was my biggest fear then, I’m not afraid of now!

My biggest fear then was money, or lack thereof.

We never felt like we had a great deal of money. Looking back now, we had plenty and I really had nothing to worry about. the reason for this is really The Mrs. She watches the finances (Spends most of em too, but lets not get into that! lol) and I know she wouldn’t let us spend what we cant afford. hence, I am no longer afraid of such things. 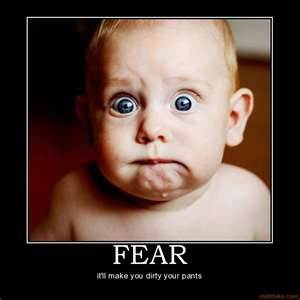 Fast Forward to last week where one of the lovely people I follow on twitter asked this of her followers:

@MinistryOfMum:Question: What do you fear since becoming a parent?
Without hesitation, I gave my answer……Failure
I don’t mean failure as a parent. I actually think we (Especially my wife) have been great parents and hopefully our second little boy, will be as great as Benjamin and make our life easy.
What I mean is failure to do the right thing or making the right decision and that thing having a negative effect.
When you become a parent, there a millions of decisions to make and every parent makes those decisions differently:
Should I give my baby a dummy or try to cope without? Do I use cloth or disposable nappies? Do I let my baby cry himself to sleep or should I rock him to sleep every night?

Whatever answers you come up with, they are not the wrong answer. There is no wrong answer, but there is repercussions to each decision. My fear is that the decisions I make are the right ones for us as a family.
Of course I have other fears now that we are having a second one. What if he is earlier than Benjamin? (That wasn’t fun!) What if when they grow up, they don’t get on? What if I pick a name and it turns out to, when combined with Benjamin sounds stupid and they get picked on at school? OK….after typing those, it appears I have more than I thought! lol
All I know is this. I don’t fear, what I cant control. If there is a problem hurtling towards me, now I’m older and wiser, I don’t worry about it. I just brace myself for impact. Then, we pick up the pieces and carry on.
So, after that ramble……What do you fear since becoming a parent?
Answers in the comment section below, or of course tweet @MinistryofMum, I’m sure she wont mind!
Thanks again for reading
FTD