I saw recently on BritMums, they were doing a blogging prompt called #Blogging4Madeleine!

The aim of this prompt is to re-raise awareness that there is a little girl who is celebrating her 9th birthday (12th May) and probably doesn’t know it because she was taken from her parents nearly 5 years ago and as not yet been found. 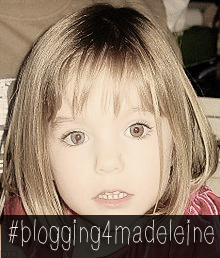 I am sure you have heard the story before but in case you haven’t……
Madeleine McCann disappeared on the evening of Thursday, 3 May 2007. She was on holiday with her parents and twin siblings in the Algarve region of Portugal. She went missing from an apartment, in the central area of the resort of Praia da Luz, a few days before her fourth birthday, and has still not been found. Madeleine’s parents, Kate and Gerry McCann, have said that they left the children unsupervised in a ground floor bedroom while they ate at a restaurant about 120 metres (130 yards) away.

Many theories exists from her simply wandering away, being kidnapped by a paedophile ring to even being murdered by her parents. My honest opinion is that she was taken, by whom we may never know. If she had been hurt either by accident or on purpose by one or both of her parents, I think more evidence of this would have been found by now. This of course is just my opinion and I suppose I would prefer the thought that this little girl is still alive and well, somewhere.
Hopefully one day, a girl will hear this story and realise that she is in fact little Madeleine and will come forward.


I originally wasn’t going to take part in this prompt, but when I thought about it, I figured what harm could it do. If one of the many blogs taking part means somebody comes forward with new information, it’s been worthwhile. So here goes….

This is a picture of Madeleine when she was taken and also what it is believed she would look like at 9 Years old. 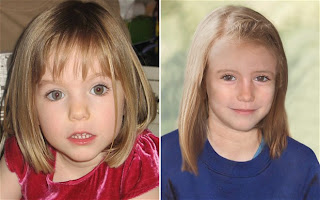 Below is information on the find Madeleine campaign and information on how you can help.
·     Contact information to report any sightings or information
o    Your local police force immediately, AND
o   Operation Grange
0207 321 9251 (in the UK)
+44 207 321 9251 (non-UK)
o   Or Operation.Grange@met.pnn.police.uk OR Crimestoppers in confidence on 0800 555111 OR www.crimestoppers-uk.org
·         The Find Madeleine official website www.findmadeleine.com
·         http://www.findmadeleine.com/support/ways-you-can-help.html
A big thanks to lead organisers:
Caroline – http://amummysview.wordpress.com
KellyAnn – http://teaandbiscotti.com/
As always Thanks for reading
FTD