On the 18th March we celebrated mothers day in the UK.

As it was the first mothers day as a family I thought it would be a cool idea to have ‘The Mrs’ provide a little guest post on her first ever mothers day as a mum!! So let me introduce to you, the mastermind behind our Operation…Christine (The Mrs) 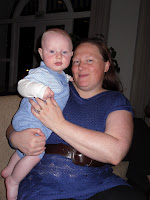 To be honest, I didn’t expect it to be much other than a normal day. We don’t really celebrate occasions like this in our house other than cards….Valentine’s Day, Birthdays (unless it’s a special one), wedding ann etc. Even Xmas was never a big deal until this year when we had Benjamin to spoil.
Benjamin woke me up as normal, but about 7.30 rather than the usual 6.30-7 wake up call. A nice sleep in. And I had only been up with him twice in the night, which is good.
He had lots of smiles and cuddles. He has become quite cuddly now, puts his arms around you and lays his head on your shoulder…..it’s ace.
We came downstairs to get breakfast and on the table waiting for me were 2 cards, a big bunch of flowers, chocolates, a teddy that says ‘heart’ U Mum (My first mummy related item!) and a personalised phone cover with a picture of our little man.I was really surprised and so happy. A lot of thought and effort had obviously been put in to this.
The cards are fab, one from Benjamin with lots of hugs and drooly kisses and then one from Lewis, which is really nice and says on your 1stMothers Day 2012. I like things like this.
I still find it hard to believe I am a mummy, and we have an 8 month old…..I mean I still remember having the ‘im leaking’ conversation with Lewis when my water’s broke…..how can 8 months have passed already.
I loved the fact that this Mothers day, I was the mummy, which was such a great yet, odd feeling. I think I am still getting used to having Benjamin here, but I’m so glad he is and love watching him grow in to the little monkey he’s becoming.
I’m now looking forward to some great art work of homemade cards from Benjamin in the future. Better start practising my gentle ‘is that a ?’ voice whilst trying to work out what he has drawn!