Skip to content
Forgive me blogger for I haven’t blogged. It has been 18 days since my last post.
Howdy ya’ll. Long time no type! As you can see from above, it’s been a while since I last released my own dose of boredom on the world and boy am I back with a vengeance!!…and a very long post.
Now for that are not in need for a cure for insomnia, I’ll make it brief. This is what’s happened since when we last spoke’.

For those that are bored counting sheep, let me rattle on a bit more.
BB has gone into 3-6 months clothes  – My little man is growing so much. Nearly every day I see something different about him. It might just be the way he smiles a little different, or makes a noise that he wouldn’t normally make, but every day is a new experience for him. Luckily, he is still one of the happiest little babies. Always smiling, always shrieking with joy and always having a kick about and play. He obviously can’t talk to us, but I am happy he’s happy and that’s the most important thing.
BB is so close to holding his own head  – The way I see it, the first major step in development is the ability to hold your own neck. You can drink from birth, you can see from birth, hear from birth but holding your head is the first thing you learn and master. All the stuff like standing on your own, talking, crawling, they all come afterwards. Well BB is close. Right now he mostly looks like a boxer ducking and weaving to avoid his opponents jab. We have discussed when it would be the right time to start weaning him off of mummy and onto ‘grown up’ food. Well, I think once he can hod his head and he is comfortable on a chair, that’s the right time.
We have organised our first night without BB – We have not yet had a night away from BB. I have had days/nights where I haven’t been able to have a cuddle or speak to him because he was sleeping, but I have never been far away. That will change soon. In November I go away for the weekend, but he will still have his mummy. That won’t be the case in December. As usual, December brings Christmas and therefore Christmas do’s! It just so happens that mine and Christine’s works do is on the same night. Unsurprisingly, grandma and granddad jumped at the chance to look after him overnight. I’m sure at the time; we will both be constantly messaging to check he is OK. 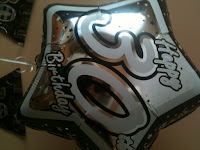 I turned 30 – Well it’s been coming for about 29 years, so I can’t say I was too surprised! I had a perfect day. Did as little as possible and spent some quality time with the most important things in my life; BB, Christine and my Xbox360. Although Christine agreed with me that we should go watch shopping to replace my current watch, it was all a lie.  She had been scrimping and saving for months and I was delighted to find a new watch wrapped up for my birthday, so no need to go shopping.
We had a great meal on the Saturday night, just me, my family and my best friend (who might as well me family). That was followed a few days later with another meal with friends including another birthday boy.
All in all, it was a great birthday and a great way to leave my 20’s. Let’s hope the next 10 years brings as much happiness as the past 10 has.
If you’re still reading at this point, well done, that must have been hard. Thank you.
Hopefully, I won’t leave it as long next time.
As always, thanks for reading and take care.
Lewis